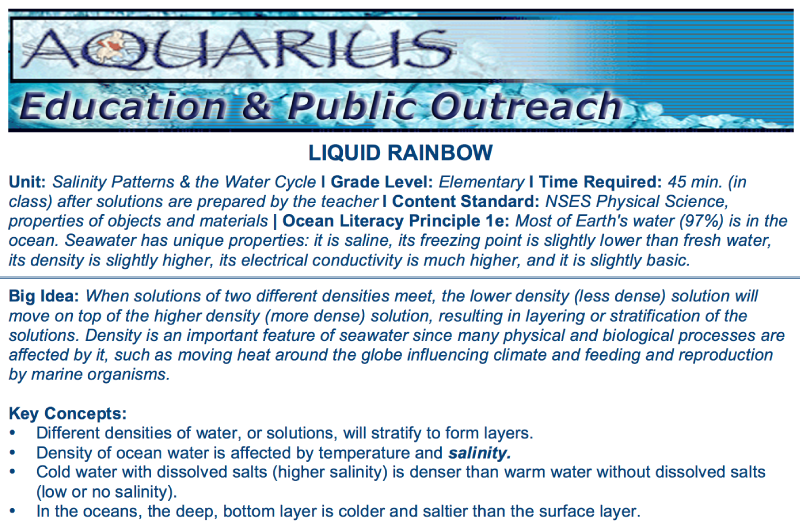 Liquid Rainbow
Liquid Rainbow (PDF, 1.3 MB) »
Source: NASA Aquarius
[12-Feb-2010] Density is a property of matter that can be introduced at the elementary level by thinking of it in terms of the relationship between weight and volume. How can two objects that are the same size have different weights? The answer has to do with their density. An object's density is determined by comparing its mass to its volume. If you compare a rock and a cork that are the same size (they have equal volume), which is heavier? The rock is, because it has more mass. Thus the rock is denser than the cork because it has more mass in the same volume. Liquids have density too. Unlike the densities of solids, which remain relatively constant, the densities of many fluids can be easily changed. Do objects float the same way in fresh water as they do in salt water? If you have the same amount of each, saltwater weighs more than fresh water. Salt water is described as being more dense than fresh water. In the case of ocean water, heating, cooling, and salinity all influence density. Circulation in the ocean depends in part on differences in density of the water. Water with more salt is denser (heavier) and sinks while fresh water is less dense and "floats" on the surface. These buoyancy differences can result in the separation of water into layers (stratification) within an estuary or ocean. Stratification can be disrupted by tidal mixing, heating and cooling of surface waters,and / or by wind generated water movement, such as waves and currents. This action results in vertical mixing. Density driven currents are an important feature in coastal waters, affecting the physical, chemical, and biological dynamics in the ocean. Many marine organisms use density currents for migration, reproduction, and feeding.